On the behaviour of high-dimensional normal distributions

It is quite intuitive that random normal vectors center around the origin. However, this does not hold in higher dimensions. The concentration properties of higher dimensional normal distributions deviate heavily from our understanding of normal distributions in low dimensions. In this post we investigate, where in $\mathcal{R}^n$ is a high-dimensional random normal vector likely to be located?

The normal distribution is one of the most widely used probability distributions in statistics and machine learning. Our experience from handling gaussian distributions in low dimensions tells us that it generally follows a bell curve and there is a high probability that a value drawn from a 1-dimensional $\mathcal{N}(0, 1)$ distribution with mean zero and variance one will be close to the origin.

We can check this empirically. Random draws from $\mathcal{N}(0,1)$ have a high chance of being close to zero as is evident in the histogram in Figure 1.

Now, let’s check whether this observation holds in the case of 2-dimensions.

It is clear that values are tightly concentrated around the origin in low dimensional cases.

As we have seen till now, the random normal vectors in low-dimensional cases have a high probability of being close to the origin. However, it can be observed empirically that this property is not true when we move towards higher dimensions.

which is the Euclidean norm of $x$.

Quite unintuitively, the majority of vectors have length around $10 = \sqrt{100}$. Why is that? This is quite unexpected and goes against our intuition of random normal vectors being centered around zero.

Well, as it turns out, there is a very elegant theorem to explain why high-dimensional normal vectors are not centered around zero.

To understand a bit more intuitively why this happens, let’s look at the Euclidean norm again. $$ ||x||_2 = \sqrt{(0 + \epsilon_1)^{2} + (0 + \epsilon_2)^{2} + \dots + (0 + \epsilon_n)^{2}} $$ Here, $\epsilon_i$ is the deviation of $x_i$ from zero. Each entry in $x$ will on average be zero because it is $\mathcal{N}(0,1)$. The deviations from zero are not significant in low dimensions, However, as we start increasing dimensions, the non-significant deviations start adding up which results in a large Euclidean norm and thus $x$ is far away from origin. Another way to think about this is that in a high dimensional space, there is more room for each component of $x$ to move.

The following figure provides a high level intuition of what we mean by vectors situated at sphere of radius $\sqrt{n}$ taken from the amazing book1 by Roman Vershynin.

With this knowledge, it seems like a very logical and intuitive conclusion to think that high-dimensional random normal vectors are not centered around zero.

Another observation is that the vectors are pushed away from the origin in a circle. To understand why this happens, we need to look at the properties of orthogonal matrix and random normal vectors.

This property is known as Rotation Invariance which means $Ux$ has the same distribution as $x$. We can check this empirically as well.

All of this leads us to the elegant observation that gaussian distributions in high dimensions are close to the uniform distribution on the sphere of radius $\sqrt{n}$.

This result has some interesting implications: 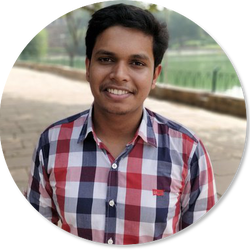 Exploring NLProc Research one step at a time